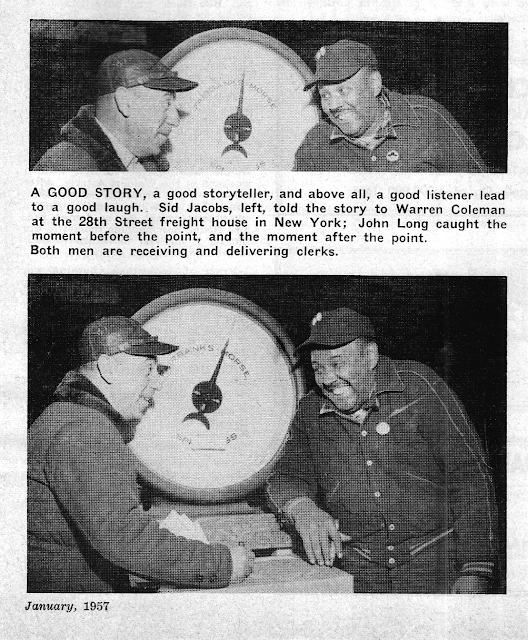 While looking through the January 1957 issue of Erie Magazine, I noticed a couple of stories that had modeling impllications. No, they weren't about a piece of equipment, nor were they a useful picture of a structure or even a map of track arrangements. They had to do with the life around the railroad.

The first one is a diptych of two receiving and delivering clerks, Sid and Warren who are involved in a story. They are standing in front of a Fairbanks-Morse scale at the 28th Street freight house. The scale is an interesting bit, yes, but I'm interested in Sid and Warren who work there because of Jim Senese in Tulsa, OK.

One of the most transformative operating sessions I've ever experienced occurred a couple of years during an LDSIG-OpSIG Regional Convention at Jim's Kansas City Terminal. If you have never been there or know the layout's narrative component, it is a unique bit of modeling experience. (They are having their annual convention at the end of March this year.)

When you arrive, you are given a tour of the layout with time to ask questions and hear about the various railroads that operated in the Terminal area. There were the Santa Fe, KCS, Frisco, and MoPac (now it is MKT instead of Santa Fe) in the final weekend before the Frisco was absorbed by the Burlington Northern in 1980. After you are familiar with the layout and mies en scene, you are handed a sealed FedEx envelope with your work orders for one of the four railroads. You've just been hired!

Alongside your switch lists, pencil and railroad credentials, you receive a description of the personality of the railroad that just hired you. I've been there twice, and I have operated the Santa Fe and the Frisco portions of the layout which turn out to be fairly opposite personalities.

The Santa Fe card points out how cooperative and "we're all in this together" attitude the workers have, along with being professional and friendly. So my partner and I tucked in our shirt tails and buttoned up our shirts to the top button before heading out to work that day. On the road, we tried to help people with their moves if possible, yielded at crossings if it was convenient, and tried to keep the track clear for oncoming traffic from the other railroads to keep the trains moving as best we could.

Now the next time I operated, we drew the Frisco job, and the description indicated that we weren't all that interested in what others needed from us, and that we would finish whatever we were doing before considering helping or yielding to other crews' desires. We were supposed to be a little cranky, too, if I remember correctly, so we got to play up being snarky and put out every time we could. Unfortunately, we ended up not interfacing with the other railroads that much for some reason, so we were a little disappointed that we could fully render our characters. Cranky, bitter characters are the ones that win Oscars, but as luck had it, we had the right part, but the script just happened to not deliver that go around.

The point is that acting is a sort of modeling, and by adding that element, Jim gets you into character literally. It becomes even more interesting when you get to try a different railroad and have a completely different perspective and experience for a few ours of modeling operations at the Kansas City Terminal.

So ever since my really wonderful experience, I have been looking for things that deliniate the character of the railroads I am interested in modeling. The picture of Sid and Warren certainly provide some valuable insight.

First off, these guys must not hate each other. A "good storyteller" seems to be code for not only someone with an imagination and sense of humor, but maybe he was a little too creative in how he worked sometimes, or maybe he was so efficient at his work to the point that he usually had time to spin a yarn for a colleague. I'm, of course, only conjecturing, but Sid looks like an instigator, and Warren looks as if he doesn't need much convincing either. Remember, too, that this was the 1950s and there must have been some sort of racial something going on whether it was positive or negative in our eyes, and there was something that made this seemingly intimate moment possible between the coworkers. Wouldn't it be fun to try to model the actual workers of your modeled location? Employee magazines are a good start for material like this.

Sid and Warren aren't exactly great candidates for modeling in an operating session, but maybe they get mentioned in the instructions. "Spot those boxcars right in front of the freight house doors, or Sid will be telling everyone stories about how bad an engineer you are for the next month!" Sid will be the figure on the platform looking at you while you perform your job for the evening, and every time you push a car past his platform, I bet you think about how close you can get your boxcar door to his freight house ramp!

The second image in the same issue shows us Blackie, the Chief Yard Dog at Croxton Yard who suffered a broken leg. You bet my layout is going to have a representation of Blackie (looks like a retriever of some sort to this cat-centric modeler) roaming Croxton. Probably will change locations every session, as a good yard dog is always 'working it.' Maybe he gets placed near rough track as a gentle warning, or simply something for visitors to look for every session. 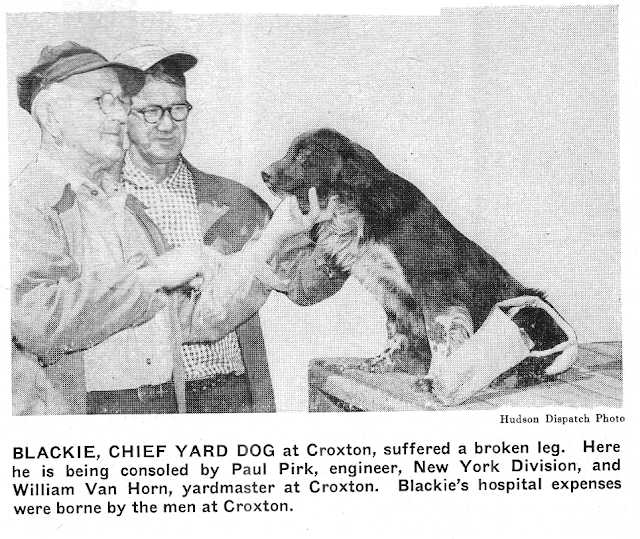 I believe these sorts of modeling opportunities abound, and don't require a tremendous amount of effort to provide depth of character to your layout. I'm kinda of a research wonk (hey - I'm an academic by day, and I enjoy the act of discovering new information), so it gives me focus for my activities. When I look through old employee magazines I'm not just looking at the glamor shots of shiny new locomotives, but I'm also filtering for information about the people behind the operations of the prototype that may add that extra touch of color in my operating sessions. Makes the reading of old documents more fun - there is now more that is 'useful' to me as a modeler - and I have something else to make my layout unique to the prototype story I'm narrating for my friends.

So maybe pick up some ephemera at the next swap meet or next time you are browsing the offerings on eBay. You probably will get a double dose of enjoyment from learning some more about your chosen prototype and from implementing that new information in your next operating session.