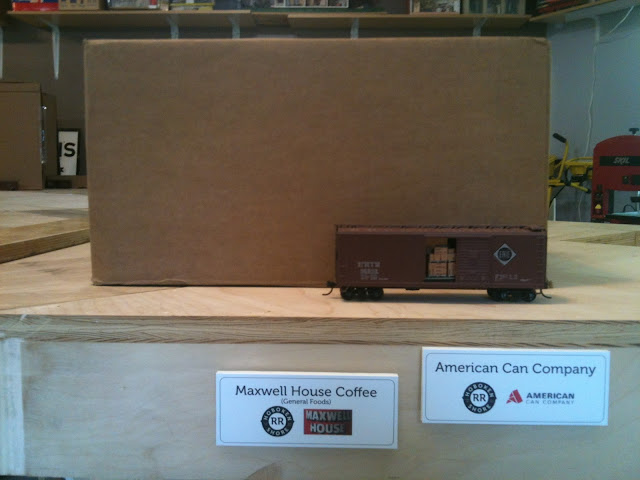 Buildings and streets and water...

Latest plan with details starting to flesh out the scenery.

Of particular note is the center peninsula with 14th Street running almost the entire length terminating in the viaduct that climbs the hillside to West Hoboken. Instead of having a backdrop that divides the scene, I am opting for a scene that divides the scene. (Buildings are only placeholders at the moment, more specific prototype footprints to come.) This will provide some good urban density to the layout which will give context to the bustle of the industrial railroading. The goal is to capture how the railroad is sandwiched between the Hudson River and a dense urban fabric. The track has been pulled toward the aisles on both sides to accommodate a wider street (Faller car system?!). 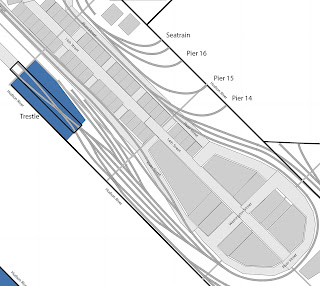 Some minor evolution at the end of the peninsula with the domino at the Bethlehem piers shrinking to 18 inch depth. This has already been implemented and provides better reach to tracks as well as more room in the aisle. The minimum aisle width is now 4'-2". What isn't showing is a closet in the Erie pier area (bottom right) that leaves about an 18 inch clearance between it and the peninsula at the moment. I've tricked myself into thinking the closet is going away, but doubts are creeping into the picture... 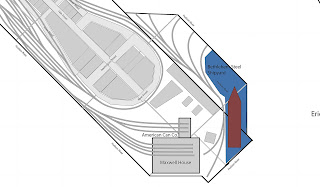 At the moment there is some spatial distortion taking place with the street grid - we'll see if it remains. The streets above the HBS yard are the same streets that cross the peninsula at 14th Street as 14th actually runs above the yard in real life. The industries above the yard are in the alley in the block between 14th and 15th Streets. A modeling compromise that seems OK at the moment.

A couple of strong personal ties to the history of Hoboken will be a part of the layout. I've added a baseball field to represent Elysian Field and the birth of The Game, and Hamilton and Burr (an ancestor of mine) will be dueling somewhere around there as well.

I've also got some room for big ship models.

Next steps on the plan will be to tighten up the streets (it's a little hard to manipulate shapes in Rail Modeler), check buildings and track more closely against maps and images, and make out a shopping list for track.

Next bit of constructing will be on the 149th to complete its transformation to a lightweight layout so the room can become a guest room again. I've only got a couple of more weeks of concerted work time before I get crazy busy again for the next nine months.
Posted by Riley at 8:49 AM 2 comments:

This track plan is kind of buried in the HBS Report, so I thought I would post here for Bruce, Mark and all the folks following their Hoboken Shore layout construction at Railroad Line Forums. The enlarged view shows the location of the double slip switches in the conversation. There is a nice post on page three of that thread which has images of a brochure probably from the 60s.
Posted by Riley at 10:36 PM No comments:

I'm trying to clear out the layout room for upcoming guests and general well-being. To do this, the next step is getting the 149th in a more mobile and storable condition.

The deconstruction of the Erie 149th Street Yard

Wires removed, track lifted mostly intact on black floor underlayment, outriggers for new fascia board installing, and the dense 15-ply Baltic Birch plywood being removed. The adhesive caulk used to secure the underlayment and track popped right up with only a modicum of effort.

Had to quit for the evening before finishing since tomorrow is an early morning, but I made good progress. I'm thinking 3/16" Gatorfoam over 3/4" extruded foam insulation board on top of the existing pine framing. (See modelrailroaddesign.blogspot.com for discussion of options.) This is a combination of expediency, bricolage, and good ol' laziness. (It was expediency that led me to use the densest plywood in the world the first time around.)

I think I'm going to explore the more space age semi-monocoque designs that Joe Brant introduced to the conversation over at my other blog for future construction of pocket terminals. For now, I want to get done and get back to the HBS construction.

A revised track plan with the Bethlehem Steel tracks reversed and the Seatrain and Piers 14-16 tracks reconfigured. The HBS yard is also moved forward towards the operator to help with reach and will also allow room for buildings between the yard and the 14th Street industries.

I am still working my way around the layout taking operator reach and position in mind while adding buildings and scenery elements. One of those elements might be a Faller car system as used at Miniatur Wunderland. The airport emergency vehicles are pretty amazing. This is a whole 'nuther set of design considerations...

In the meantime, I think I am close to ordering track to start laying the HBS yard.
Posted by Riley at 10:44 PM No comments: 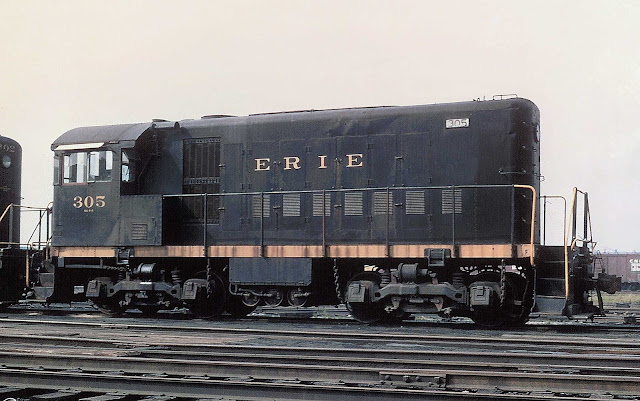 I have updated the Erie Locomotive page with several 300 and 400 series locomotive photographs I currently have on hand. There are some weird formatting issues I am still wrestling with Blogger on, hence why a couple of images are out of sequence and caption spacing is off. I probably am asking too much posting so many photos in one entry. 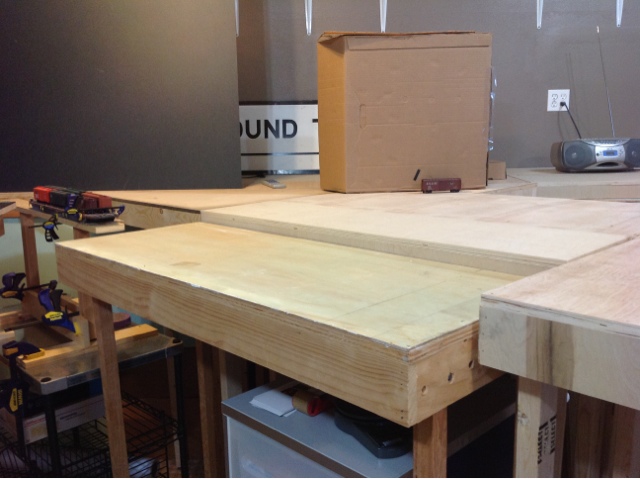 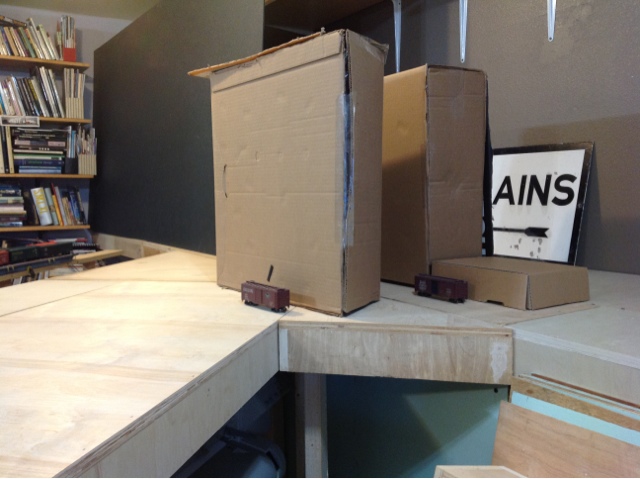 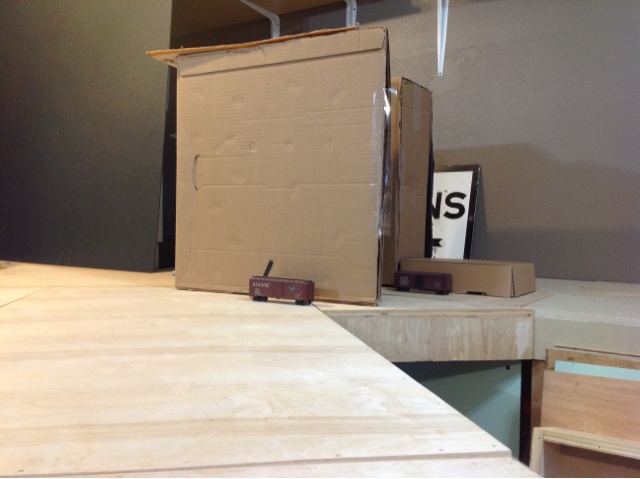 I finished making a couple of triangular modules and setting them and the rest of the peninsula dominos in place and adjusting legs. Also spent some time relocating legs on some modules to provide a toe space (about 3-1/2") on the aisles.

Photos show a quickie test on the completed peninsula bench work and how the Lipton Tea building will dwarf rolling stock. The cardboard model approximates true scale size of the multistory edifice. There won't be much sunshine in between the 12 story wings...
Posted by Riley at 11:33 PM No comments:

Progress today on the bench work. I was able to assemble the end piece of the peninsula from four existing modules and switch out legs on a module to shorten it for water, piers and ships at the Bethlehem Steel Shipyard area of the layout. I also constructed a triangular module (hiding in lower-middle left of photo poking up behind a backdrop board) that will create the transition connection between the wall modules and the 45 degree peninsula. I realized after making the 3' right triangle module, that I should have made it in two pieces so I can lower one side. I think I can take a pass at with the circular saw to get that accomplished. A shame, because the angles were cut really well and it came together so easily.
Assembling the end modules provided a satisfying visceral appreciation for the domino type construction method. Being able to play with the configuration of the smaller pieces allowed me to think physically for a brief moment about the layout that I had not yet experienced. This actually led to a bit of a rush starting to think about how to position the buildings and having sections of big ships dwarfing the 44 tonners who will be scurrying around the shipyard. Interesting feeling that I haven't felt in a long time since I haven't been making things on a regular basis for quite awhile. Hopefully a portend of more good feelings to come.

I must say, also, that the geometry of the bench work itself is actually very satisfying visually. Good composition that reminds me of a [better] version of the Chase Manhattan Bank logo.

Logo for the Hoboken Shore Railroad

Noodling around on a new 'authentic-looking' logo for the HBS... I think this would look good on a hat or tee shirt.
Posted by Riley at 12:20 AM No comments: 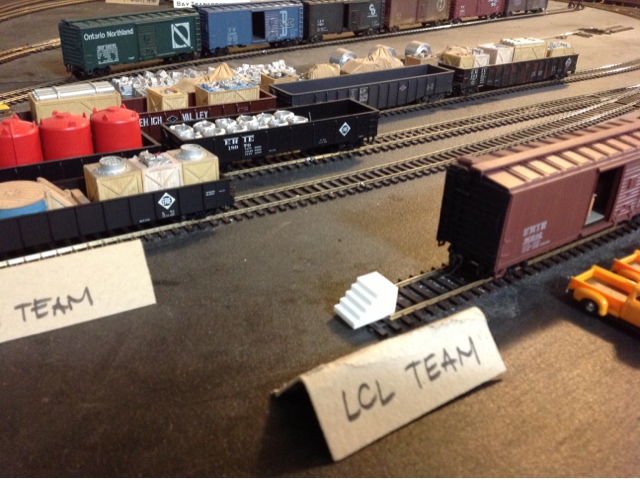 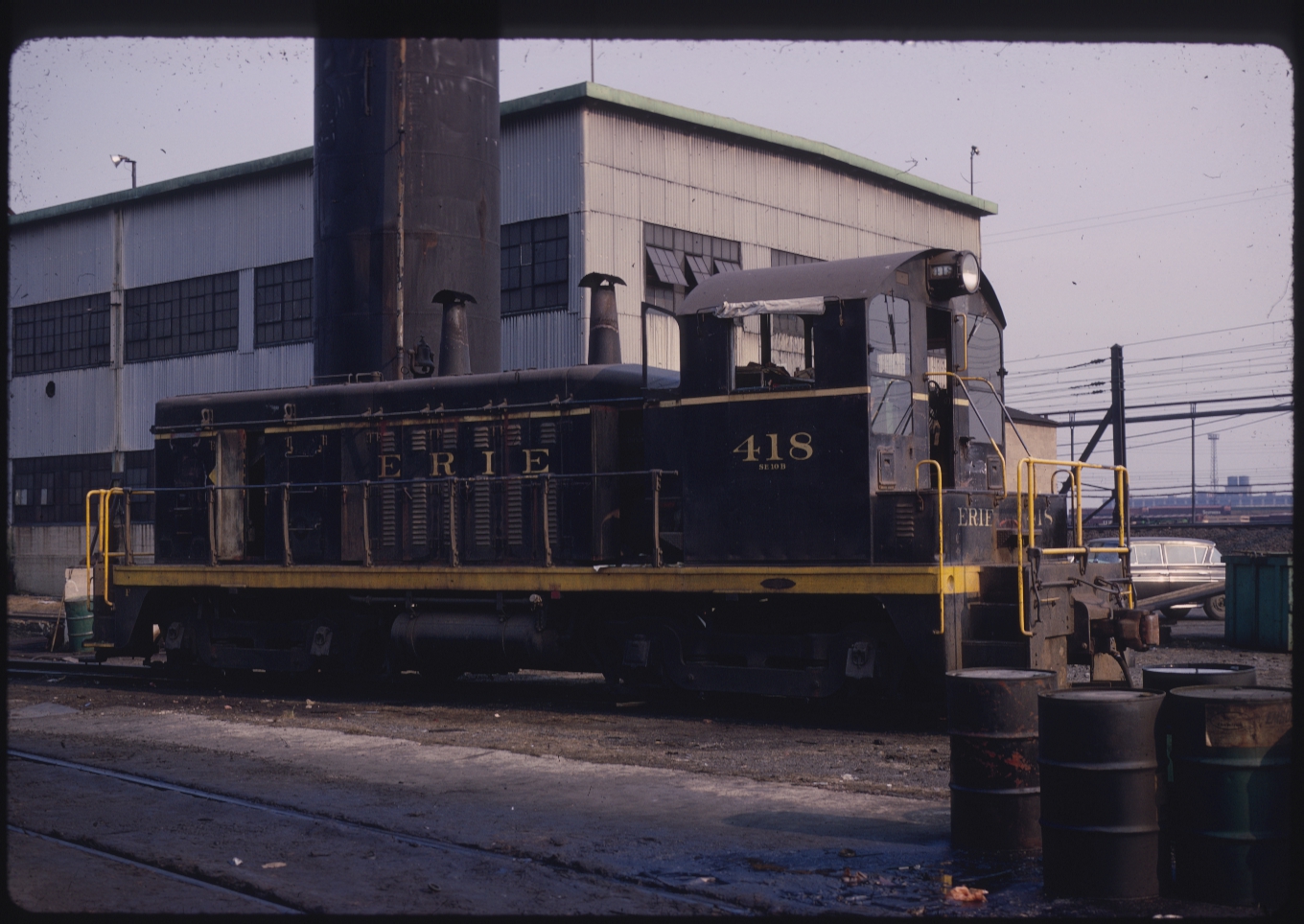 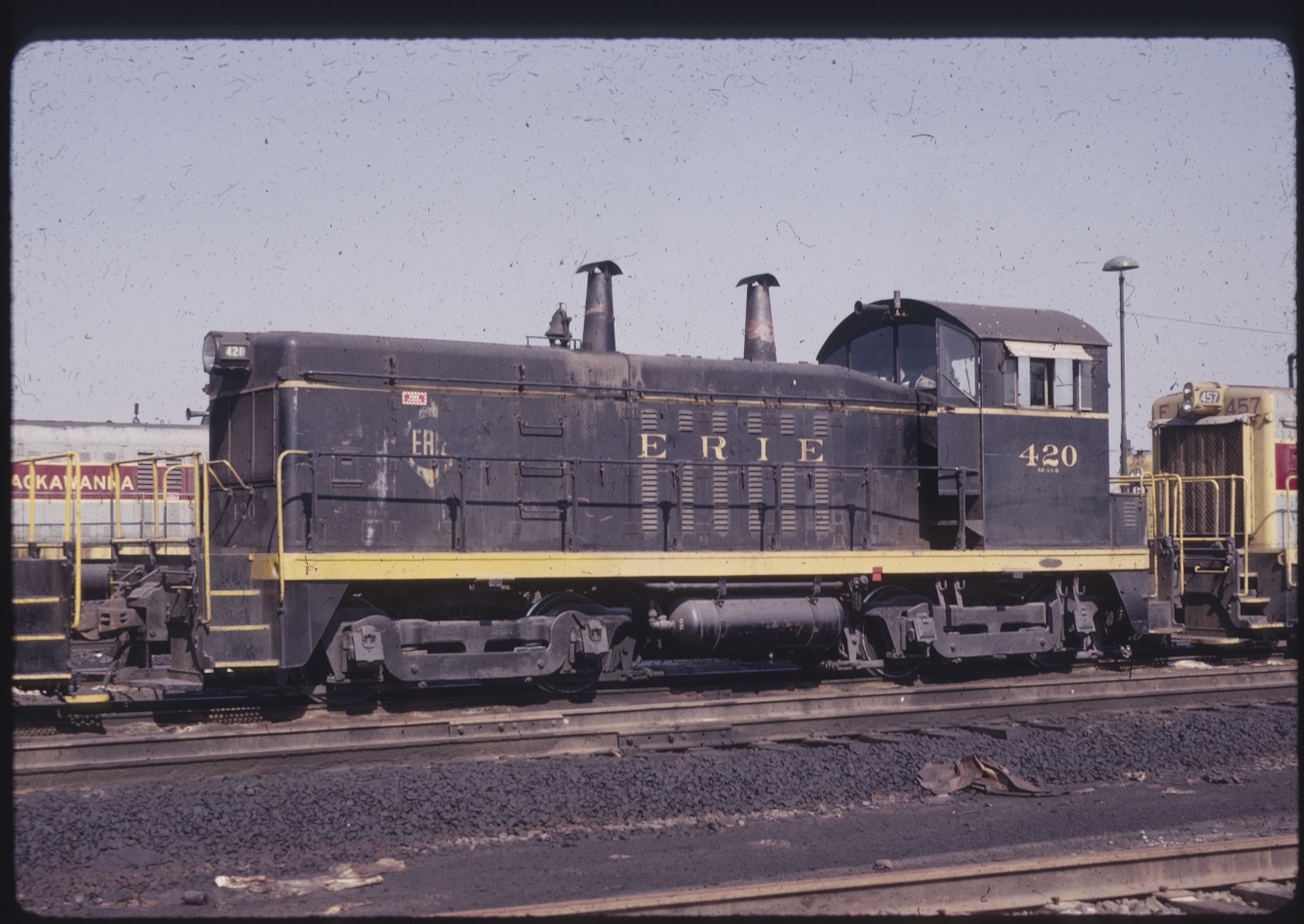 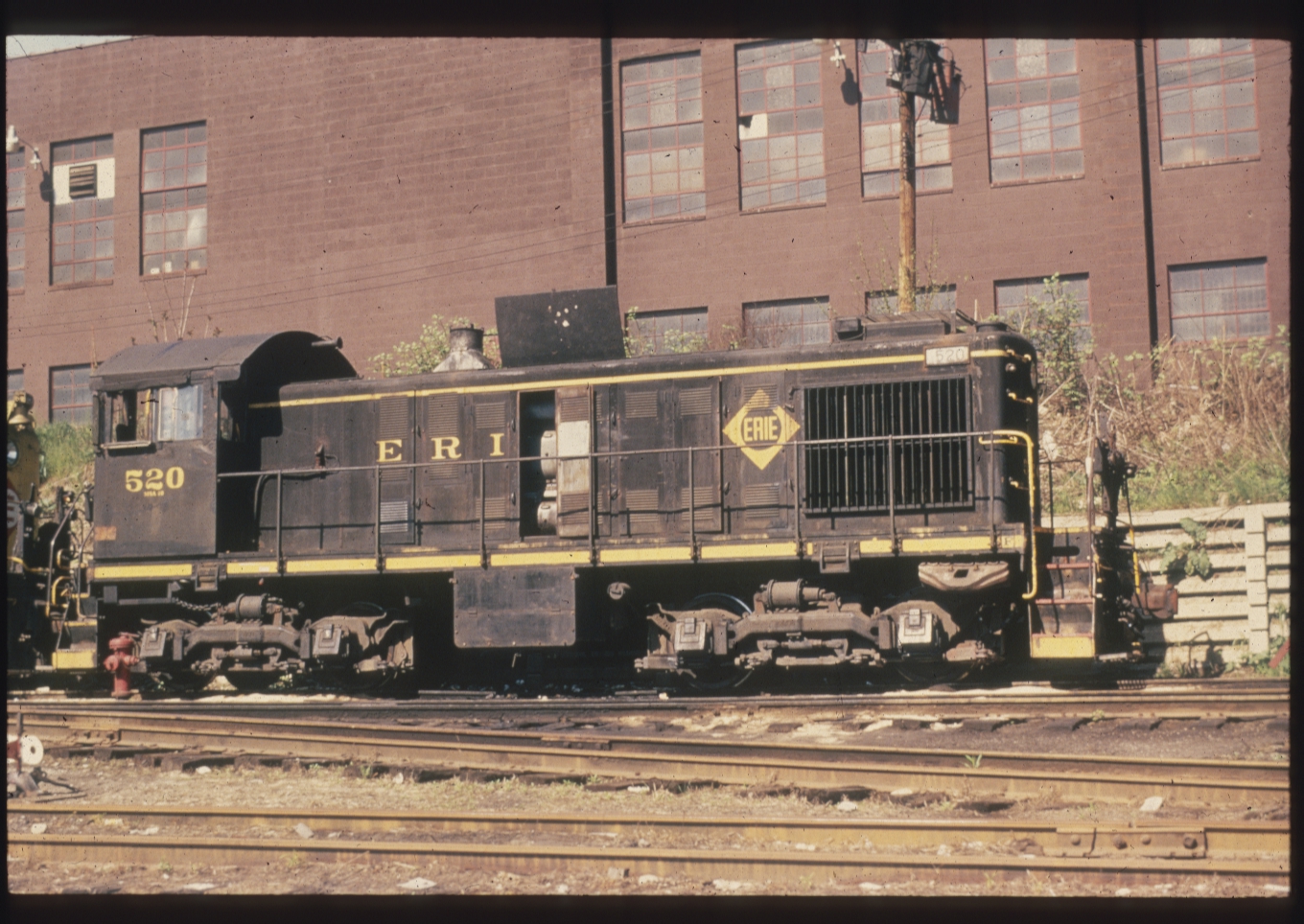 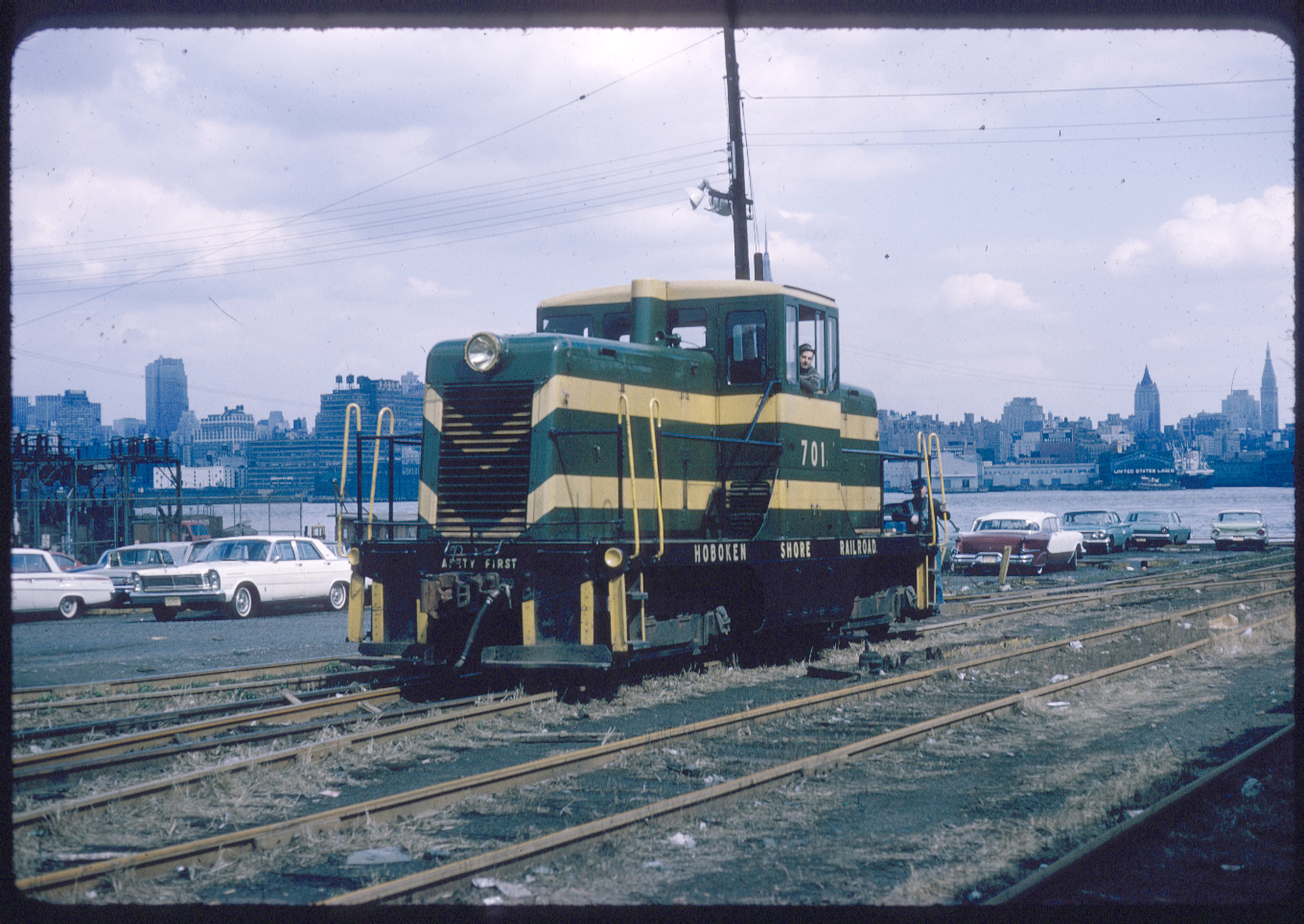 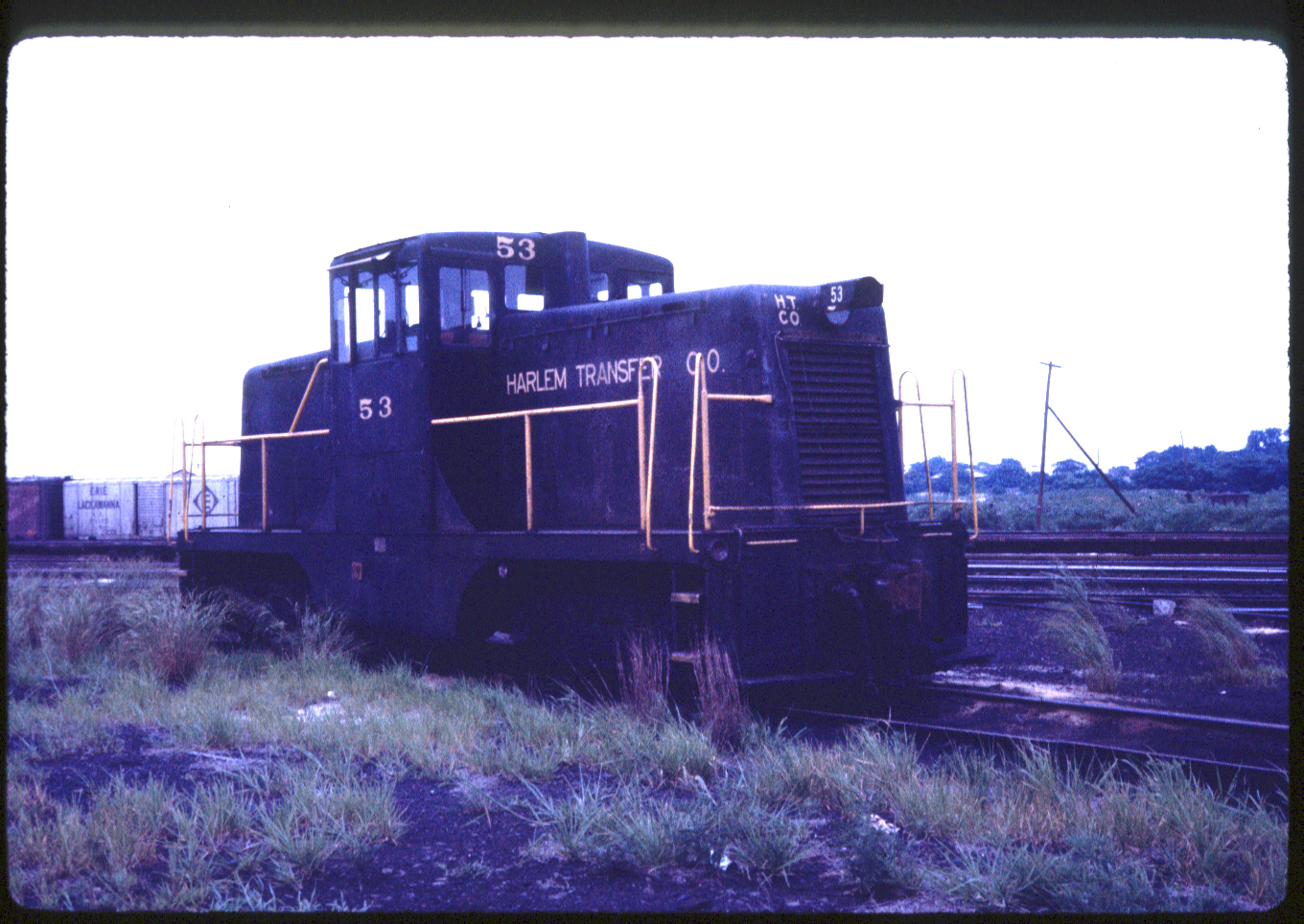 
I am starting to realize some critical mass when it comes to research material about the Hoboken Shore Railroad. For several topics, I am now able to cross reference and form a better picture of the facilities, customers and operations of the HBS through photos, real estate reports, financial statements, newspaper articles, books, web pages, maps, etc. This is where it states to get exciting, and I can turn my attention towards how to apply this data and turn it into information to enhance the layout and its operations as well as the overall experience of interacting with the layout. An example is the US Testing Company on Park Street.

I am really happy to find this photo of the inside of one of the industries on the HBS, which shows mattresses being tested at the United States Testing Company, Inc.. Not that I will ever model the interior of this customer (though maybe I could?), but having visual evidence of the activities certainly adds to the understanding of the business. Besides, it might be fun to have a pile of beat up mattresses sitting outside the loading dock ready for garbage collection. The tie between activity, objects shipped, location, building and character of the company will provide a rich experience for operators who other wise would just be dropping a car on the spur. This repositions the activity of the operator from abstract car movement to one with some sort of interest and meaning associated with the movement creating a deeper experience.


An advertisement from the Lawrence Kansas Journal-World newspaper references the testing of mattresses done by US Testing October 27th 1960 Page Three. (Google News)

U.S.Testing was located at 1415 Park Avenue, Hoboken. It was served by its own spur track and spot just south of the main HBS yard and backed up to the alley tracks running through the middle of the 1400 block.
There is a nice little crossing of the spur from the second track in across the outside track. The image below from the Sanborn map shows a different track configuration, but I believe the real estate map would be more accurate with regard to track locations.

A cursory web search turned up some dirt on the company when it tested dirt in the 1980s. From the Hoboken 411 website:

Back in 1991, United States Testing Company pleaded guilty to falsifying tests for the Environmental Protection Agency in the late 80′s. They were tasked with the responsibility of determining whether various Superfund sites across the country contained toxic material. It was discovered that, for the purpose of submitting the tests faster, and with lest cost overhead, USTC took inappropriate “shortcuts” and used faked samples, non-calibrated equipment and other violations of their contract with the EPA. They were fined $100k and were ordered to pay back the nearly $900k they received for the contract.
Their faked tests impacted 171 sites across the country, and had to be eventually re-tested by the EPA.


This all gets me a really good picture of what was happening at US Testing. Now how do I turn all of the information into things that will enhance operator experience...?
Posted by Riley at 1:47 PM No comments: