An amazing thing happened today - something worked. I was able to install a CVP mini-AirWire radio control system "in" an HBS 44tonner, and it worked on the first try. I will ride this feeling for as long as I can.

I used a spare gondola (after converting the couplers to Kadee No.5s) to carry the battery (made for Airsoft guns) and CONVRTR chip along with wiring and a power toggle switch. I attached small plugs to the micro-Tsunami leads and two wires run between gondola and locomotive. I can explain in detail the set up more later if there is interest.


Note: There are no lights in the locomotive, yet. May not ever be, since they didn't operate at night, and several of the terminal railroads didn't require them. I'll have to check if that is the case on the HBS. This locomotive was a problem child, too, when it was just DCC, but it showed none of those signs in the initial run. That points to track pick up as the culprit, and not the Soundtraxx micro-Tsunami decoder. I was thinking that the 750 was getting overloaded and resetting, but apparently not.

I'll need to clean up the wiring now that I know it works, and I may try to put the decoder in the gondola, too, if I can't get it situated inside the locomotive. It keeps the body shell up off the chassis just enough to mess up the body-mounted coupler heights. I may be able to modify the motor enclosure enough that it will lay flat.

There will be a tarp or something over the "load" in the gondola, and the wires will be painted black and as small a gauge as possible. It should end up looking like hoses. The idler car works fine on the HBS, but the Erie 149th Street terminal doesn't have any spare room on a crucial lead.

The parts are not cheap, but then again, what is? The HBS will be an all battery fleet (5-8 locomotives), but the pocket terminals will probably stay DCC since there will be a variety of road names on numerous units - unless the shells are the only things that change...? ;) 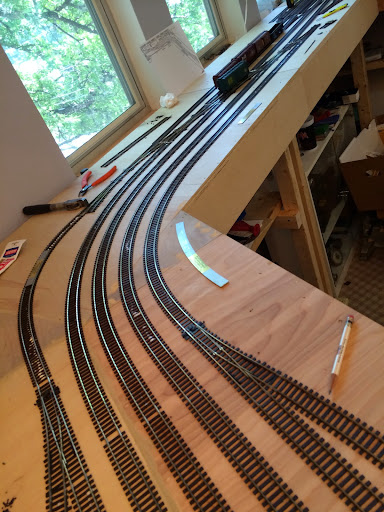 The curved portion of the HBS yard is now in. 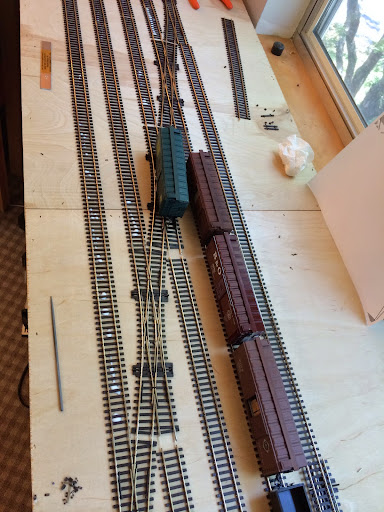 As is the double slip ladder on the north end of the yard. The next step is to verify that the  Erie yard tracks and the first section of HBS yard tracks between the north ladder and the slip switches are equal. Why? So that the switcher can move equal cuts of cars between them. This is a good example of those small decisions that should be made with operations in mind. 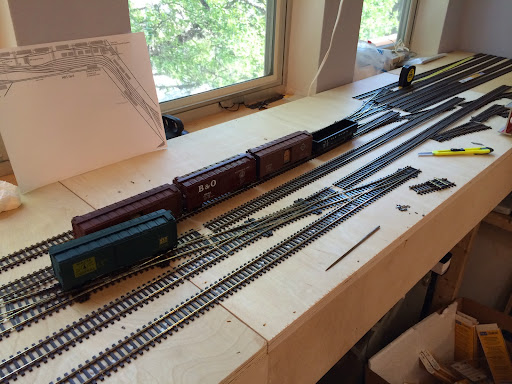 In this case, I empirically verified that the optimal number of 40' cars is 4 that can be accommodated on each side of the ladder. 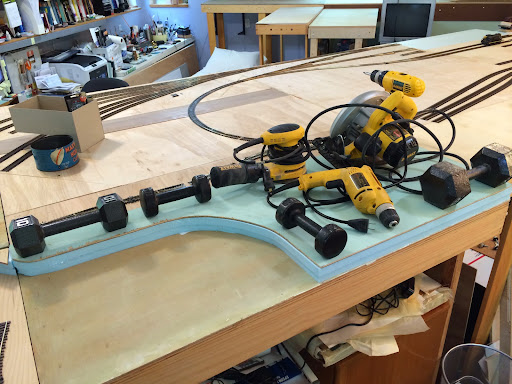 Across the way from the interchange yard over at Bethlehem, the shoreline is getting glued to the module so I can continue laying track inside their property. This end is where the dry docks and piers run into the aisle. A large ship will float here somehow sliced in section to fit.
Posted by Riley at 8:45 PM No comments: 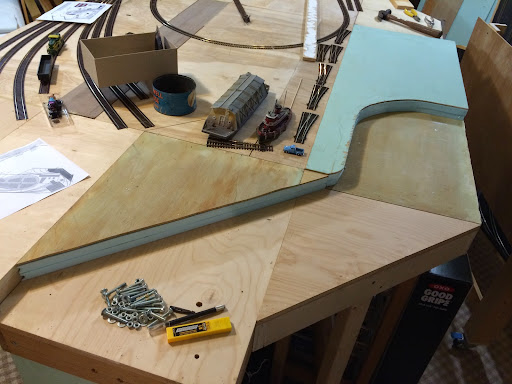 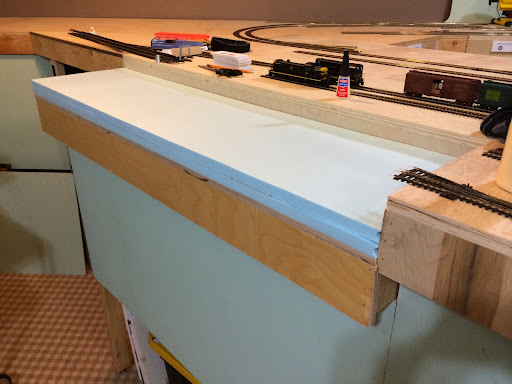 Installed some foam tonight at water modules to clean up bulkhead line at Bethlehem Steel and float bridge.

Battery radio control system from CVP ordered. It will be an involved project to install in a switcher with an idler flat or gondola carrying the battery and maybe chip, too. Stay tuned.
Posted by Riley at 11:52 PM No comments: