After following Tony Thompson's and Mr Car Floater's posts about translating to a layout waybills and other paper work for a while, I thought I would post a couple of forms from the Erie that might be of interest.


The waybill in question is for a three-part prepaid freight bill that has copies for the shipper and cashier as well as the original. This seems to be of common configuration and information set, and it can easily be transferred to a format for modeling as in Tony's illustrations. Would or could the "prepaid" nature come into play for modelers? Probably not likely, but hardcore enthusiasts who would dare follow Doug Gurin's ideas on modeling operations more prototypically may find a gem here.


At the Tulsa Op/LDSig meet a couple of years ago, Doug (seated far right) suggested that there are many, many, (many) possibilities for getting serious about modeling operational features of train movements. One suggestion was to have paperwork for less than carload pickups from the passenger depot platform. The slip of paper/waybill would represent this pick up and have the usual effects on the operations of a layout. It would give passenger trains more to do, physically engage the operators, slow train movements, etc. The prepaid waybill above may suggest another one of these possibilities.

I don't know how this was handled (feel free to jump in here, anyone), but I assume that Cash On Delivery items would have been handled by conductors in the field? So in addition to the stack of waybills, the conductors would need to return with cash and then reconcile their day's collections with the waybills before turning everything over to the clerk. So having a stack of regular and prepaid waybills would add a layer of complexity Doug is looking for.

I'm not considering doing this, but I think the idea that the physical manifestation of a characteristic of the prototype being modeled is a good thing. One should pick and choose these items from the operational landscape just as carefully as one would pick scenery for a particular location along the tracks. For my own interests, I am seriously considering a flaky idea - to model the tug boat/car float operations. More on this as it develops...

More forms that may be fun not necessarily as operational feature of your layout, but more likely paper scenery that can extend the modeling experience beyond the layout. 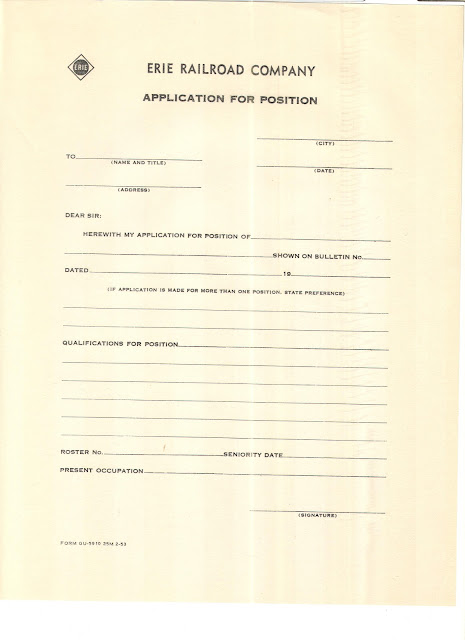 Need a form to log the newbie's basic contact information? How about an application to be an employee of your railroad? 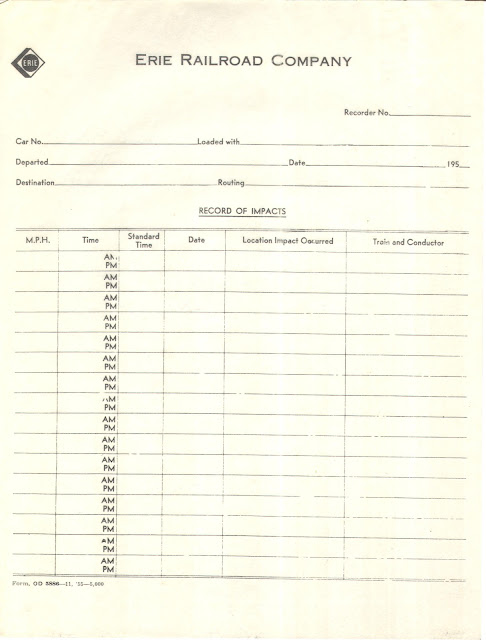 Have a wreck? How about getting your conductor to report any impacts to the Dispatcher or Trainmaster and make a note on the Record of Impacts form? As much as a fine system relies on the good natured owning-up to mistakes as part of the game, this might be a little harder for crews to enjoy, as it means railroad property was put in physical jeopardy. A certain level of understanding would have to be achieved that although property damage is undesirable, it is accepted as part of the game, and to deal with it in the game is actually fun... 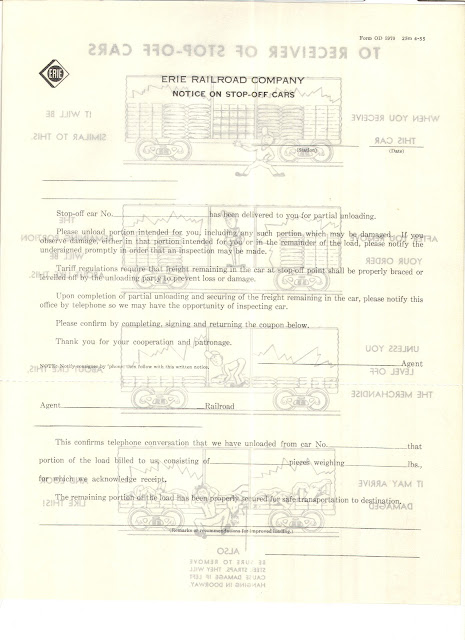 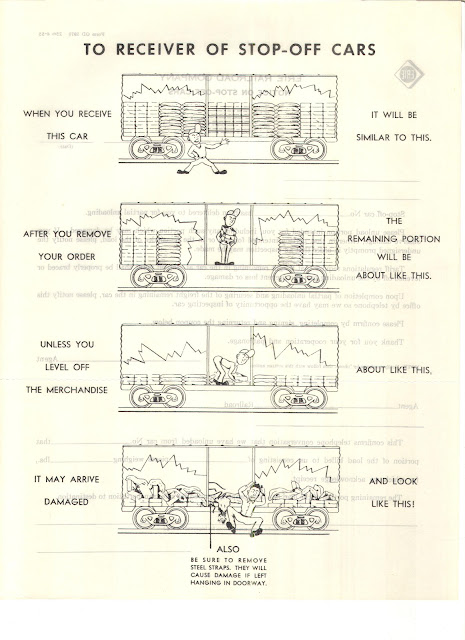 Another one in the category of Doug's LCL activity is the Stop-Off Car form which is used for similar actions. I like the illustrations depicting proper readjustment of car contents. This gave me an idea for a visual bad order form where you could mark locations of problems on the car or locomotive rather than trying to describe them. Could be similar to a rental car diagram showing prior damage. 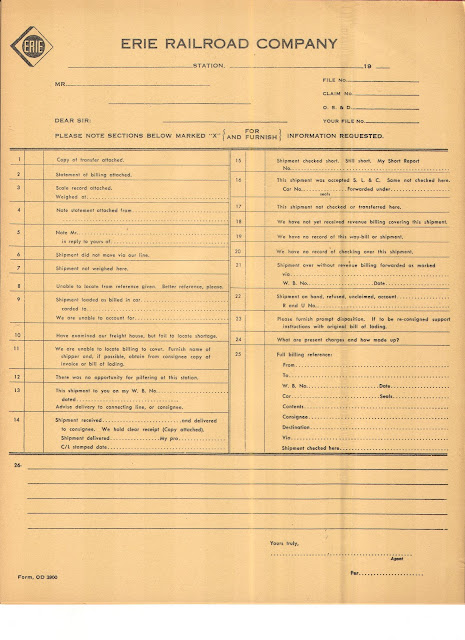 Finally, a more detailed form for interacting with the customers. Categories include lost items, billing info and other conditions that might affect a delivery. Again, not something to be modeled in my opinion, but maybe it will spark some other idea.

I've always enjoyed ephemera, and any way to include such characteristic bits of paperwork is welcomed - as long as it adds to the flavor of the layout experience and is not just busywork that detracts from the fun of operating. This may be hard to nail down for your crew as the sweet spot could be anywhere from a Dungeon and Dragon's mounds of character and adventuring paperwork to no paperwork at all.

The key, in my opinion, to making any decision about a layout including operating procedures is to make anything you do on the railroad essential and inevitable so that when you don't do it, it seems like there is something missing about the operating session.