Without really trying, I accomplished a goal before the end of the year (it wasn't a real deadline or goal, but I'll take the accomplishment as if it were one of those "I'm going to do this before the end of the year" kind of things). I started converting the modules I acquired earlier this year into benchwork for the Hoboken Shore portion of the layout in the main layout room. 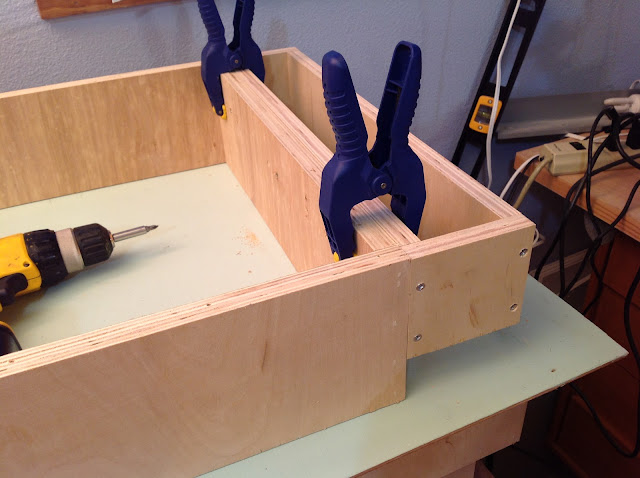 To begin with, I added a 4" extension to make the modules a full 4' long which resulted in a 20"x48" module. I ripped a 4" strip from several 2'x4'x18mm Luan plywood pieces from the local big box home improvement store. The 4" strips were then turned into the 4" extensions in short order and added to the existing backdrop modules.
These modified modules were then added to existing 12"x48" modules to create a new 32"x48" module. New legs to put the top of benchwork (TOB) at 50-3/4" above finished floor (AFF). This height was arrived at from my reach experiments on the 149th as these pocket yards are a little deeper than regular 2x4 benchwork dominos. I see it as a compromise from my preferred height that is up around 54" and a lower height that may be more comfortable for shorter operators.

Something of interest I'm doing is using 2x3s for legs instead of standard 2x2s. At my local big box home improvement store, they only had pine 2x2s and no oak 2x2s which David Barrow uses on the CM&SF. The oak is strong and straight, the pine are a cheaper, inferior, but perfectly useable alternative - except when the only thing left are the dregs that are warped, split and worthless. So in steps the 2x3s that are only about 50 cents more than the 2x2s and a lot cheaper than oak. They are labeled Spruce-Pine and smell pretty good, plus they were really straight and tight-grained and strong. The extra heft is pretty nice (at a very small premium), so I'm going to look to continue using them at this point. 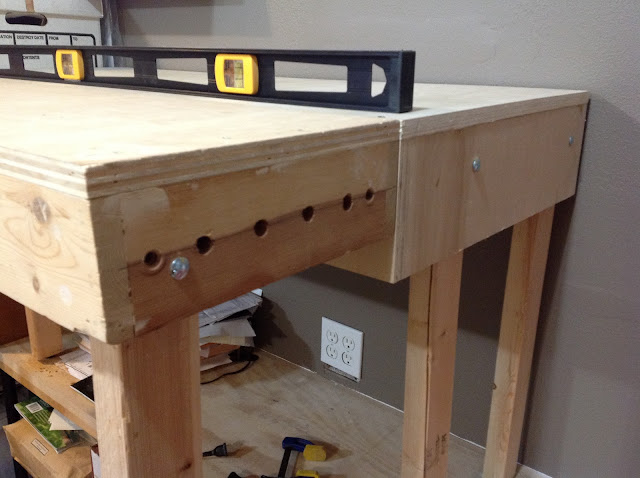 So I managed to convert and install 4-1/2 dominos - I need to make a 12"x48" piece for the last one - and get one entire side of the layout benchwork in. I'm using the 1/4" Luan plywood from the backdrops on the legs to provide a uniform skirt that will cover up a lot of the clutter in the room underneath the layout. Much easier than actually taking care of the stuff is to just hide it in place! The plywood is blue (these were sky backdrops), but I will paint a dark color - perhaps a very dark Erie Green or even black.
I've got three more backdrop modules to convert and a couple of more 18"x48" modules, which need legs, and then I only need to build a few feet of new benchwork to complete the HBS portion. I'm not planning on laying track here immediately, though. I still want to do another pocket terminal next to start to prove out the idea of having scattered, lightweight and easily moveable yards serviced by car floats to begin with.
The 149th is sporting some new cars picked up from the annual train show, and it is close to being presentable to visiting operators. I would like to get another yard up before having an official session. I realized that with the regional convention slated to be in Austin in 2014, I should set a goal of having operating sessions for the convention. This means I need to pick up the pace. Deadlines do help move things along...