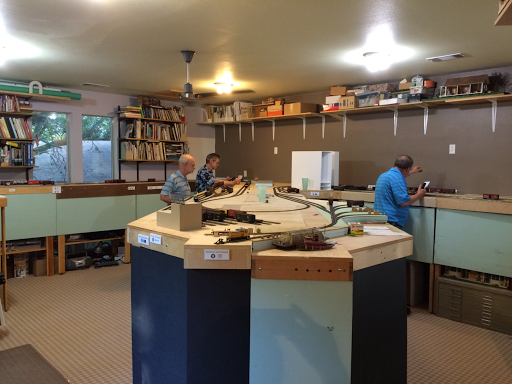 Op session No.3 on the PoNY is in the books. Tom Pearson drove down from Fort Worth, and George Zapalac and Steve Jackobs (part of the South Austin cartel) attended. George and Steve handled the line jobs out in the Docks, the Float Yard, Bethlehem Steel Shipyard and Maxwell House. The session started with a brief introduction for the rookies. 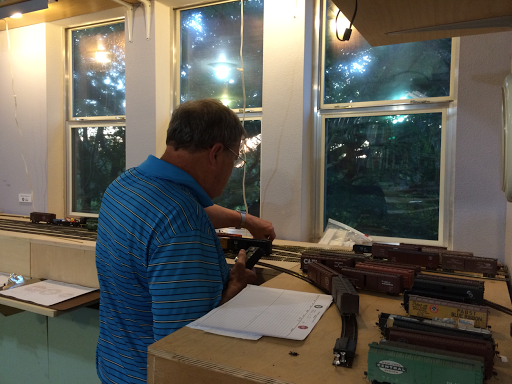 In my briefing, I try to do three things: set the mies en scene using maps, images and descriptions of intent, provide practical information about taking care of crew necessities (where's the restroom, drinks and chairs), and set operating expectations. I explain my 'thesis' for the layout, which is the central organizing element for everything on the layout. 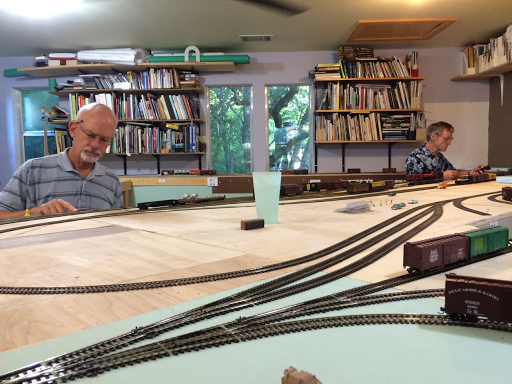 I want the operators to get a feel for the everydayness of this particular place. It is not about solving puzzles (although there are plenty of switching puzzles throughout), it is not about stress from timetables (we essentially have a 1:1 clock), external expectations or conflicting movement, it is not about finishing first. In fact, I state tongue in cheek that the first person to finish their assignments 'loses'. In other words, slow down and become intimate with what is happening on the layout, your locomotive, and your fellow operators. 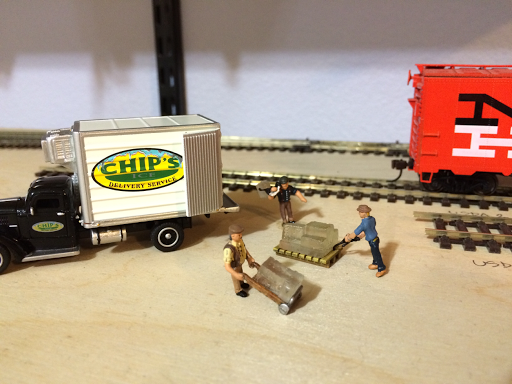 It is a game, but we are not moving abstract pieces around a two-dimensional game board, we are re-enacting / recreating the people who actually lived and worked here and their activities that actually happened in order to understand them both better. The culmination of these three goals of the briefing is to offer several ways of playing the game to best fit the skill level and interests of the participants. 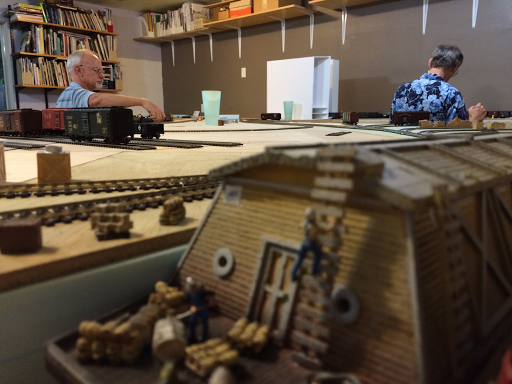 Each locomotive is set up to have momentum and braking, and we use switch lists (no car cards anywhere), which becomes a baseline of playing. Beyond that, the individual can choose how prototypically they play they wish to play the game. The next level up from the base line is to use horn and bell properly. Then employing brakemen like wargaming miniatures to further immerse the operator into the people and pace of the place we are simulating. There are certain rules being developed for this part. 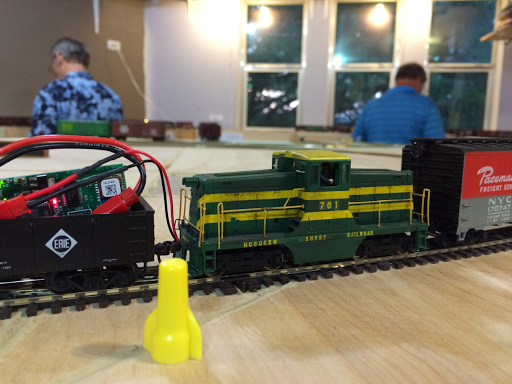 To start with, all switch and coupler actions must occur with a brakeman on the ground at that location. A brakeman may ride on cars or locomotive, and they can perform tasks within the radius of a long bamboo skewer uncoupling tool. They may also walk, but their movement is decidedly slow, and they get grumpy if continually asked to do this. I leave it up to the individual and their conscience on how to treat their crew. At this time, we use yellow wire nuts, but later these will be scale figures with accommodating bases and handles to be able to move them around easily. 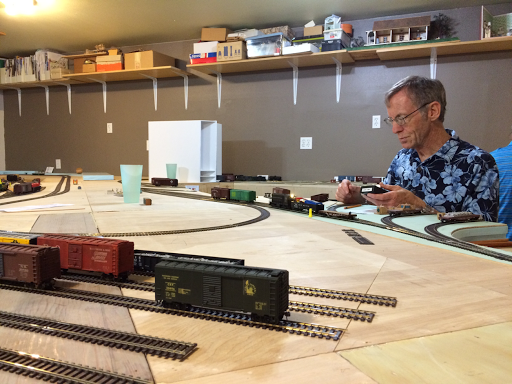 The next level up on the operating realism scale includes pauses for brake hose connections, interactions with customers, etc. At this point, ,whatever the crew decides, but later a more detailed and explained menu of items will be provided. Another layer will be layout-provided as I get around to implementing ideas. These will include gate locks, perhaps customer interactions, loading and unloading timing, the car float movement, weighing cars at the scale, refueling locomotives, etc. 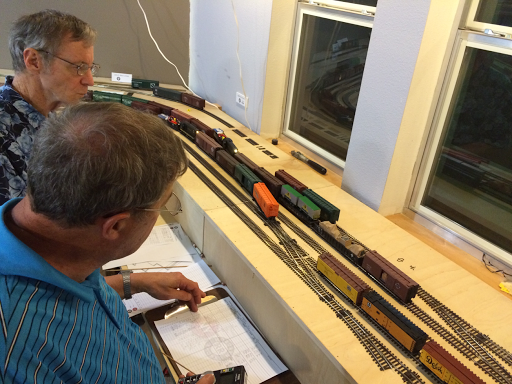 Employing an entire prix fix menu of all of these items would increase 'play density' by at least double in my projection. At this point it becomes clear that there are more things modeled about the railway operations beyond moving the cars than the actual movement of the cars themselves. Again, the point of all of this is to feel what it was like to be a railroader at this particular place - not just to complete a puzzle as fast as possible. And time plus the 'play density' equation should yield much more satisfaction of quality of experience over a quantified satisfaction of moving "x" number of cars and finishing fast. I understand that this is tantamount to a treasonous, un-American way of thinking these days, but it is all about 'how' the railway is operated, not about the amount of cars moved.

The line jobs took about 45 minutes each making 5-6 drops and 5-6 car pick ups. That's spending about 4.5 minutes moving each car and moving 20 cars a session. The reason for the extended play time with so few car movements is the braking and momentum settings on the locomotives at this point, but will be considerable extended when more menu items are added. If memory serves, Tommy Holt and David Barrow have talked about an operator moving 4 times as many cars in one of their sessions. I'll need to double check this figure. David is slowly introducing momentum and braking to his locomotives with varying degrees of acceptance by crew, but the effect will be to lengthen an operating session while moving the same amount of traffic.

In the yard, Tom serviced the 14th Street industries first, then fiddled the Erie and interchange yards. He employed the line engineers on occasion in the yard to help make moves before sending them back out on their way. On the HBS, I am encouraging this amongst the assigned jobs, so it is not about the jobs, but it is about the cooperation and the teamwork involved in keeping a busy short line moving their customers' goods quickly and efficiently. This approach is informed by how the railroad actually operated as told by employees.

From interviews by others, I have learned that there were some pretty interesting moves made in the yards with two switchers working together. Known as Broadway Yard (the HBS tracks) and Delaware Yard (the Erie tracks), the interchange between the two railroads involved some interesting moves made possible by the interstitial double slip spring switch ladder found in the HBS yard. There are also descriptions of pole switching in tight quarters on some short run around sections. I have yet to dig into it to figure out where this occurred. I wonder how one would model pole switching. Surely someone has done this already. Let me know who!

In the de-briefing session, I asked for anything that annoyed or disrupted the quality of the experience. Aside from a shockingly small number of technical issues, there were no complaints. It was noted that the slower pace was decidedly different than other local operating session styles, and that this was welcomed. The locomotives performed amazingly well, and at one point Steve asked how I kept my track so clean since he had experienced no stalls. He actually caught himself before saying this out loud realizing that the locomotives were battery powered, but he asked it anyway for a good laugh line.

The trailing battery car did not bother anyone, and all agreed that when they become enclosed and prototypical cars, it won't be any issue at all. Even now, everyone says they stop seeing the exposed wires and battery in very short order.

I deem this session a success. Lots more on the horizon, but I am totally comfortable and
satisfied at this point. I'll discuss more about the actual jobs and train movements in a future post.