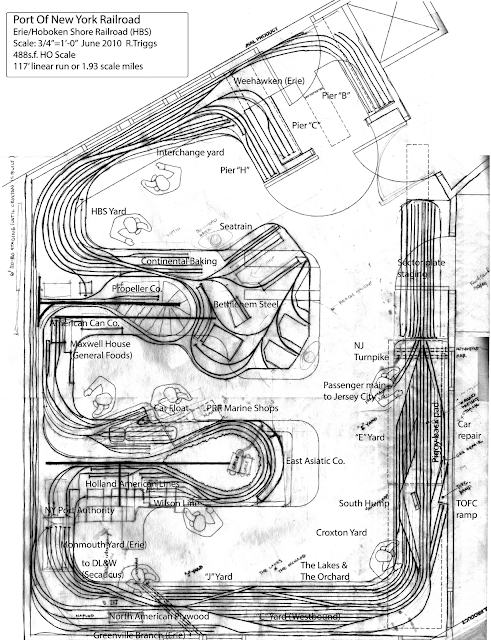 It seems I will be acquiring some pre-built bench work modules and backdrops from the old Cat Mountain and Santa Fe via Mike Barrett of Black Bear Construction Co. that he won't be able to use for his own layout. I've got a bench work plan, and the modules I will receive account for about half of the modules needed. That is significant. There may even be some legs involved.

So, I scanned and pieced together a hand drawn (and latest) version of the Erie/Hoboken Shore portion of the PoNY from 2010. The HBS is the original impetus for being interested in the New York Harbor area, and it may be moved up a bit in the build schedule. I have been putting off because of possible moves and the largeness of the project, but the module jump start may change things.

The plan (click on for a larger view) does a couple of nice things that I enjoy very much. First, the track for the HBS is a very faithful representation of the prototype almost to scale. Every industry, spur, switch, spot, etc. appears. (I just noticed the Continental Baking label is out of place - it should be opposite of the Propeller Co.) This is the attraction to shortline railroads - the fact that you can model the whole thing. This is the same attraction the pocket terminals have to me as they are essentially the shortest of all shortlines in a sense. I'm a big picture, systems type of guy, so having the entirety of something allows me to see how all of the parts work together.

The other nice bit of faithful reproduction this affords is that the twists and turns of the bench work follow the actual turns of the prototype track arrangements pretty well. The HBS Yard was positioned around a corner and there is a sweeping curve around Stevens Institute where the East Asiatic Co was located. Bethlehem Steel works out pretty slick, too, being that its track arrangement can be featured at the end of an aisle pretty close to how it was, too. The only sticky parts are the piers and how to accommodate them without cutting off the aisles.

Operating would entail from 1-8ish people when fully built. Croxton would keep 2 Erie yard goats and a yard master busy, 1 Erie yard master at Weehawken, 1 Erie transfer and main line engineer, then up to 3 HBS employees: 1 in the yard and two engineers.That is about as large a crew that is easily manageable anyway, and is another positive aspect of the plan.

I would also like to make the two aisles moveable for work or guest purposes. Casters may be enough, or maybe some of the modules will come apart for storage under the rest of the layout. Things get complicated quickly when they have to move.

I need to render the plan in a computer track planning application to assure it will actually work, but I am fairly confident that it is just a matter of nudging things one way or the other at this point to get it to work as I envision it at this point.

So what does this bit of fortune do for the PoNY build schedule? It may, indeed push up the HBS on the list. I would start with the Weehawken Yard and then do the HBS before getting to Croxton Yard maybe much later. There are some details to be worked out all over with the track placements, but it is for the most part ready to start. At the very least, I should install the acquired modules instead of just stacking them in a corner. (I could always use the extra work surface.)

Outside factors will probably determine if this or another pocket terminal sees the most attention in the near future. I've got some real world projects that may or may not allow me some good working time the rest of the summer.
Posted by Riley at 12:53 PM