Lots going on at the PoNY, and not enough extra time to talk about it as of late. We've hosted another op session and progress is being made on lighting, scenery, structures, photography, and operations fronts.

The highlights include Op Session No.8 that is in the books. Our regular crew from David Barrow's slipped in a session on the PoNY during the regular op night. I managed to take no pictures, which could mean things were so bad I was scrambling putting out fires, or that it was so enjoyable it didn't occur to me to snap any pics. I'm happy to report it was the latter. A crack yard crew proved that a full work shift is possible, and job balancing seems to be consistent across the board which makes tweaking possible now.
Before the session, I realigned the 14th St track towards the front of the layout to make reaching it easier while making it possible to get in the track to the engine house and US Testing. The great thing about gluing down track is that it is easy to move. 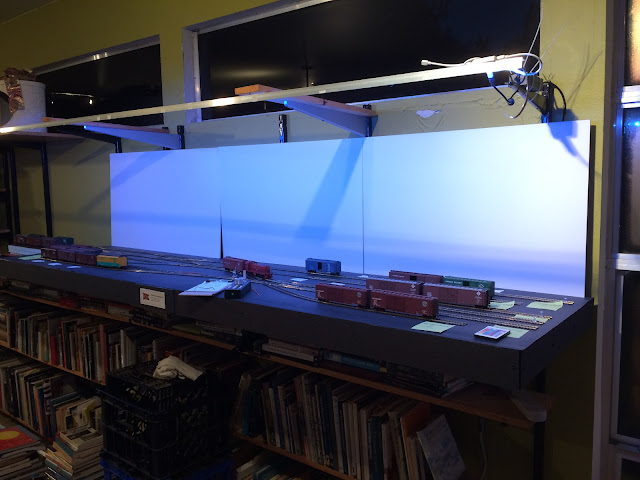 I also started testing LED strips for layout lighting on the 27th Sta. module. This one that I had on hand from another project is not bright enough. The challenge here is that there is a 19 story building that is going to be on top of it. That mean some hidden lighting to operate in the buildings as well as the general lighting. Interesting problems.

While I've been at all this, I'm also getting familiar with my camera and lights for shooting photos for articles. LEDs are a game changer here as well, as they are getting cheaper, produce daylight color temperatures, and don't get so hot like the old photo floods did.


The small freight house mock up only took a couple of hours to put together. I found some corrugated metal textures at Textures.com, arranged them in Photoshop,printed and pasted for a satisfying stand in/test fit. I'm not going to tell anyone that I accidentally made it too big. That's what happens when working while under the influence of allergies late at night. I can fix it easily enough, though.