Photo of No.19 at New Harlem Freight Station 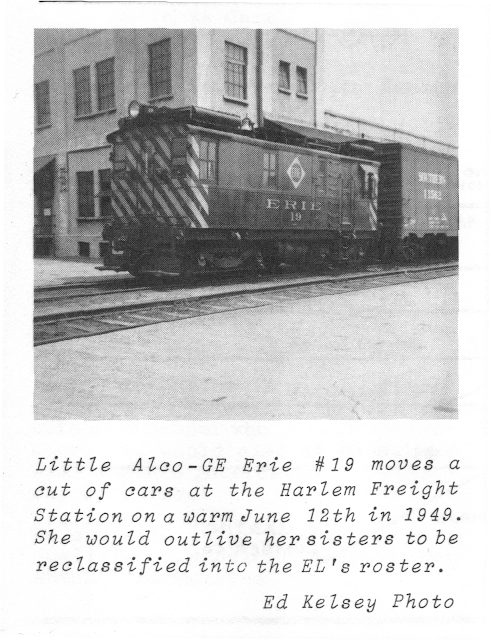 I recently found a copy of Erie Railfan (vol 1, no. 3, pp 8-9, Summer 1973) that has the second part of an excellent Larry DeYoung article on first generation diesels. Included is this photo (Ed Kelsey) of no.19 at the Harlem Station (149th Street). The building behind it is the office and freight house located on the Exterior Street side of the yard looking E-SE. No.19 was actually the fourth boxcab Erie acquired in 1928 (no.20 was the first in 1926 and nos. 21-22 in 1927).

The photo and article provide some interesting and relevant data for my layout. I now know that no.19 was at Harlem on June 12th, 1949, and that it had its end tiger striping. Cross referencing another photo from the Railroads of New York Harbor 2010 Calendar by George J. Abere, Jr. in April of 1955 shows that the striping is still there, and since it is a color photo, I know the striping is yellow as is the lettering and herald on the sides.

I also have a good reference for the building windows, awning and configuration in '49. I haven't researched this fully, yet, but the building changed over the years, so this adds a piece for nailing down what it looked like if I want to choose a specific year to model it (or perhaps multiple models for different years?)


Also of note is that it looks like the ground is paved with concrete, which is previously unknown information to me. So, I go to historicaerials.com and search for "Exterior St and 149th, New York", and I find aerials from 1954 (above) showing the concrete paving. The tracks are also uncovered at this point, and I know from a 1957 photo that the two tracks, along with others) are enclosed by a building. There is also a neat feature that allows you to compare photos side by side with a slider to reveal one or the other photo. I choose 1966 and 1954 to compare (the oldest available), and notice not only the new building, but also maybe some new tracks by the centrally located crane and an elevated I-87 over Exterior St. (below)

So a really good find leads me through a slew of resources to have a better idea of the evolution of the yard. I think I prefer the smaller building without the covered tracks, which means pre-'57 at some point. I may go to 1959 and simply construct the walls of the building with a removable roof for operation, or, better yet, just say it is '59 and not have the building. (Don't tell anyone if I end up doing that.)